Distinct thatched peaks that peep over the tree-line and flashes of burnt orange through lush Leadwood trees signal guests’ arrival at Hoyo Hoyo Safari Lodge, set on the banks of the Mluwati River in the heart of the Kruger National Park.

A celebration of the local Tsonga culture, from its traditional rondawel rooms to the splashes of tribal design and earthy tones defining its interiors, Hoyo Hoyo exudes a hearty spirit of warmth and welcoming. Expect an authentic encounter with the local Tsonga culture in extraordinary bush surroundings; the Kruger National Park, one of Africa’s most renowned conservation areas and home to the Big Five.

Join the Cape-Turtle Doves and Arrow-Marked Babblers as they welcome a new day, heading out in to the bush for a feast of the senses; the smell of damp grasses, the pinks, oranges and yellows of a gorgeous African sunrise, the hissing of hundreds of crickets preparing for a warm bush day.

Spend your afternoon lazing at the infinity pool, watching the Monarch butterflies flit past and the geckos scurrying across the deck, or retreat to the comfortable lounge for a quiet read surrounded by traditional Tsonga craft and the light breeze of a lazy afternoon. Savour a tasty Tsonga feast, treat yourself to a lengthy afternoon siesta or indulge in a soothing massage to revive body and mind.

Let the rhythm of the Shangaan ease and entertain you, inspire and teach you. Sit on the deck surrounding the open-air fire and stare at the brilliant starry sky as you listen to a storyteller tell tales of local myths and legends.

Get up close and personal with local traditions, a special encounter with the Kruger National Park and first-class hospitality at Hoyo Hoyo Safari Lodge, guaranteeing a memorable African bush experience. 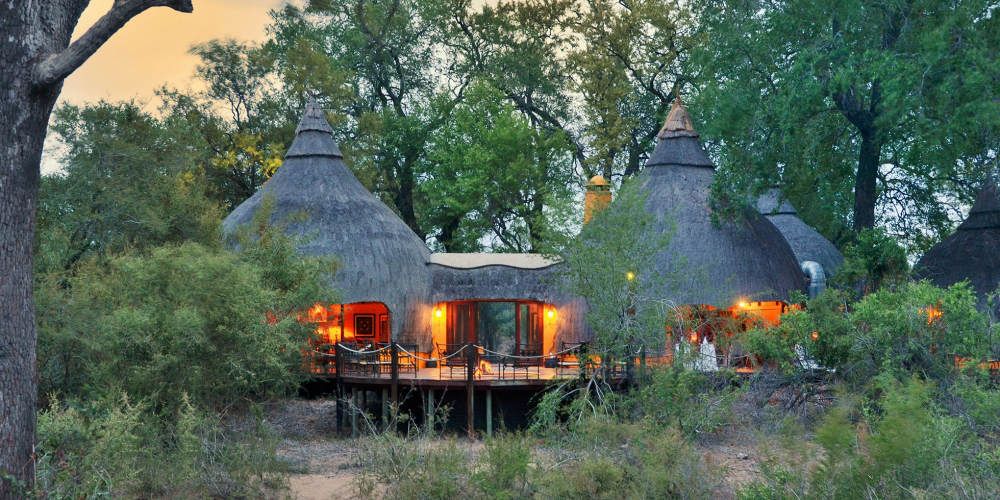 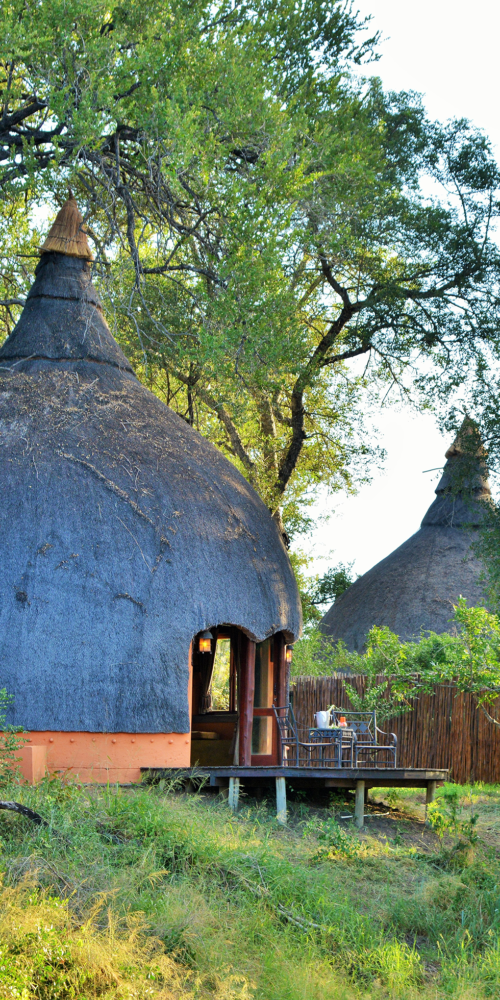 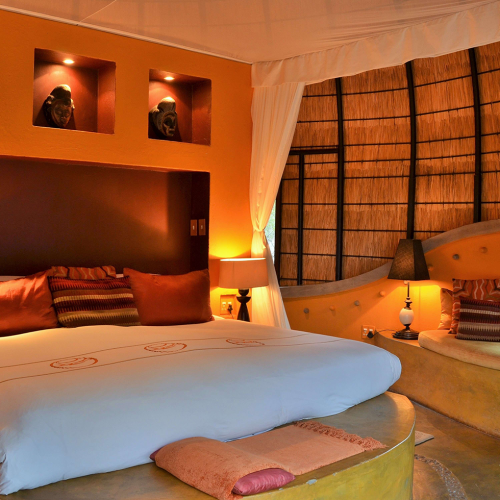 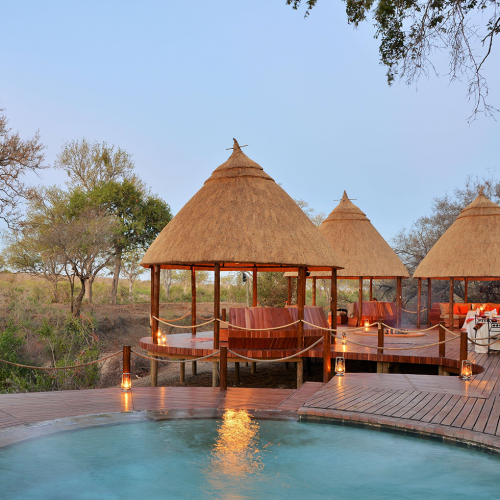 Spend your afternoon lazing at the infinity pool, watching the Monarch butterflies flit past and the geckos scurrying across the deck 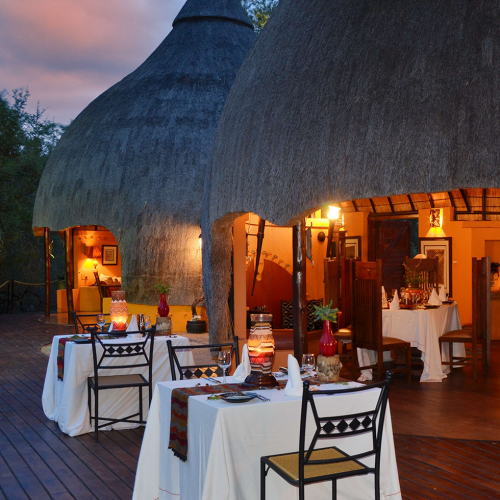 After a rewarding evening’s safari, warm yourself around Hoyo Hoyo’s open-air fire and enjoy a magical three-course dinner under the stars 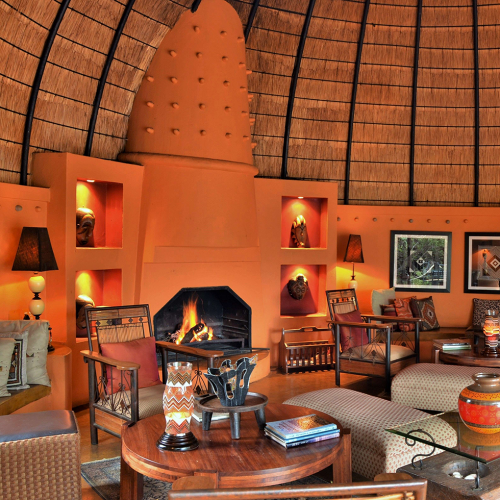 Homemade baked goods, light salads and local specialties such as beetroot salad and ostrich steak are served in relaxed surroundings

Hoyo Hoyo Safari Lodge is located within the private 10 000-hectare concession of Mluwati in the western region of the Kruger National Park, bordering the northern Sabi Sands and Manyeleti Game Reserves.

As of the 01st November 2016 Gate Entry fee for Guests staying at Hoyo Hoyo Safari Lodge will be R76.00 per person per stay. This fee is payable at the gate of entry and will be required to hand back your receipt to the gate attendant upon departure.

SA Express to Hoedspruit:
Hoyo Hoyo offers transfer for all flights at an additional charge. These are subject to availability of the transfer vehicles.  Please note that this is not a shuttle service and all transfers must be booked at time of reservation.

Relax on your private deck looking out on to the bush, take a long, leisurely shower in the open air or melt in to your comfortable king-size bed for an afternoon siesta. It’s your relaxing, informal bush experience on your terms.

Your rewards for a hard day’s safari are the delicious dishes created by Hoyo Hoyo Safari Lodge’s talented chef.

Homemade baked goods, light salads and local specialties such as beetroot salad and ostrich steak are served in relaxed surroundings; the sounds of the bush providing all the accompaniment you need for a memorable dining experience.

Enjoy a hearty buffet breakfast with a variety of fruits, nuts, yoghurts, breads, pastries and cheese or opt for a full English breakfast with bacon, sausage and eggs; freshly squeezed orange juice and strong coffee at the ready after your morning game drive.

Lunch is a light, informal affair with a buffet laden with tasty salads and meats. Followed not long after by High Tea with tea or coffee to wash down a delicious selection of cakes and pastries baked freshly at the lodge.

After a rewarding evening’s safari, warm yourself around Hoyo Hoyo’s open-air fire and enjoy a magical three-course dinner under the stars. Good wine and good conversation flow while you listen to the enchanting sounds of the surrounding bush coming alive at night.

Enjoy a traditional Tsonga breakfast under the thatched rondawel roofs of Hoyo Hoyo and then retire to your room and relax, laze at the crystal-clear infinity pool or request a bush walk for an up-close encounter with the Kruger.

Lunch is a relaxed, informal affair. Served on the deck with beautiful views of the surrounding bushveld, guests are treated to light salads and tasty desserts before retiring to their rooms for an afternoon siesta.

Indulge in a soothing massage from the comfort of your private deck, the scents of ylang ylang, vanilla and cedarwood soothing body, soul and mind. Our trained therapists hail from the local community and provide a range of massages, including full-body aromatherapy, foot massages and Swedish back and neck massages.

Sip a sundowner G&T as you watch the sky turn from the brilliance of an African sunset to a bright band of stars; the persistent call of frogs, owls and nightjars accompanying you back to Hoyo Hoyo where a traditional Tsonga dinner feast awaits; a blazing fire the perfect backdrop for tonight’s Shangaan entertainment and storytelling.

Bursting with the day’s extraordinary bush experiences, all that’s left is to retire to the comfort of your traditional Tsonga homestead with nothing but the reassuring sound of the crickets and frogs lulling you to sleep.

A private concession within the Kruger National Park comprising three lodges – Hoyo Hoyo Safari Lodge, Imbali Safari Lodge and Hamilton’s Tented Camp, Mluwati Concession was born out of a spirit of ensuring the future sustainability of the national park.

As one of the first private concessions in the Kruger National Park, Mluwati has worked tirelessly to ensure the sustainability of this pristine wilderness that for over 100 years has been a sanctuary for over 114 reptiles, 34 amphibians, 336 tree species and 147 mammal species, including Africa’s Big Five.

Experience a morning and evening game drive during your stay at Hoyo Hoyo. Witness the excitement of the first rains; the terrapins playing in river pools, the call of the Pied Kingfisher and steady chirping of tree frogs.

Savour the rich smells of the bush, hear the shrill calls of the Magpie shrike and see the wind blowing through the feather grass dotting the savannah plains.

A Hoyo Hoyo game drive will reveal new scents, curious sounds and the beauty of an extraordinary African landscape to delight your senses.

Wishing you a calm, contented #weekend after what has been a very busy first two weeks of January for many people!