Transport yourself back in time and to an era when the African safari was beheld as the epitome of elegance and style. 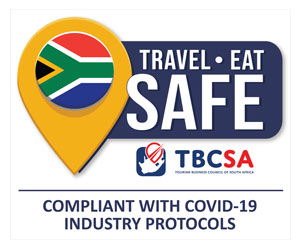 Reminiscent of an Out of Africa experience, a stay at Hamiltons Tented Camp is one that will remain etched in memory, much like the contribution the lodge’s namesake, James Stevenson-Hamilton, made to the national park the camp now calls home more than a century on.

Resplendent with early 19th century nostalgia, from its old steamer trunks and pith helmets to its antique bathroom basins and hurricane lanterns, Hamiltons is a tribute to the generation whose vision has resulted in the conservation of one of Africa’s prime wilderness areas, without compromising on modern-day comforts and luxuries.

Built entirely of canvas set amidst age-old Jackalberry and Sausage trees, with high wooden platforms linking six elevated tents, Hamiltons treats guests to stunning views of the Nwatswitsonto River and offers the opportunity to enjoy spectacular wildlife and birdlife sightings. Your encounter with the Kruger bush truly is up close and personal.

Hamiltons not only represents a little slice of history. It guarantees a private, exclusive bushveld escape, unfettered by unnecessary modern interruptions and authentic in every way. 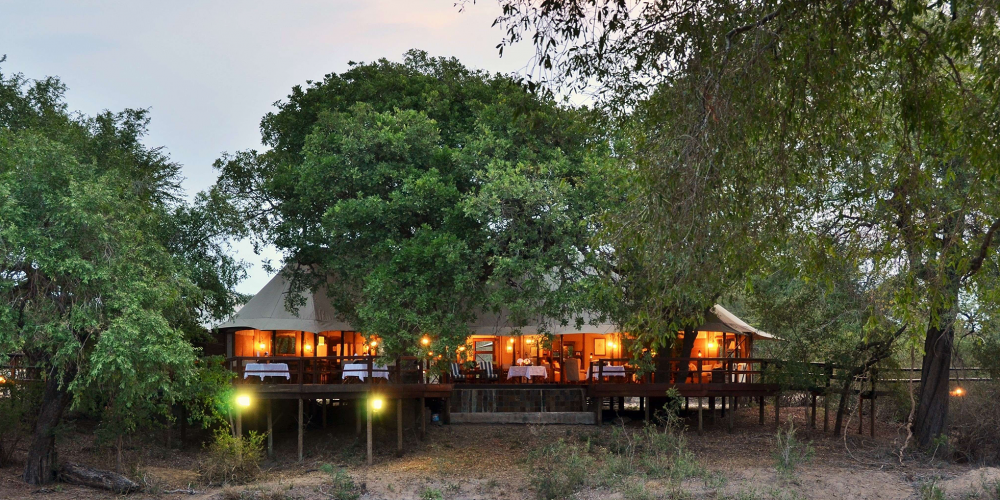 Reminiscent of an Out of Africa experience 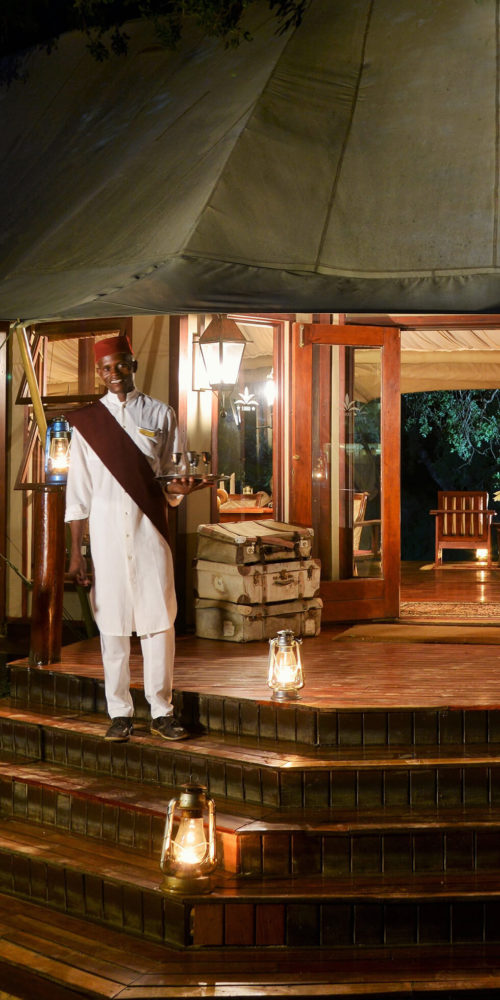 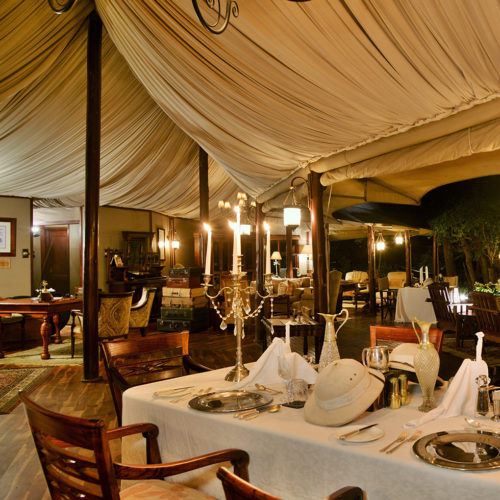 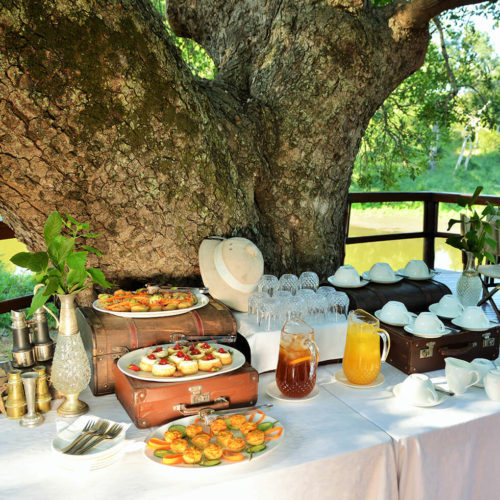 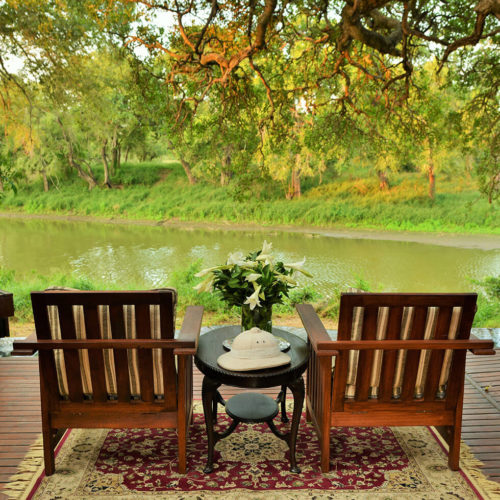 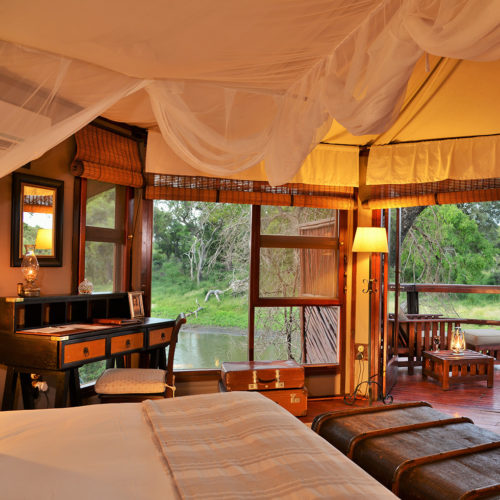 Hamiltons Tented Camp is located within the private 10 000-hectare concession of Mluwati in the western region of the Kruger National Park, bordering the northern Sabi Sands and Manyeleti Game Reserves.

As of the 01st November 2016 Gate Entry fee for Guests staying at Hamiltons Tented Camp will be R76.00 per person per stay. This fee is payable at the gate of entry and will be required to hand back your receipt to the gate attendant upon departure.

SA Express to Hoedspruit:
Hamiltons offers transfer for all flights at an additional charge. These are subject to availability of the transfer vehicles.  Please note that this is not a shuttle service and all transfers must be booked at time of reservation.

Guests are accommodated in six exceptionally private luxury elevated tents overlooking the Nwaswitsontso River. From your own private deck, you can enjoy the sights and sounds of the bush that derives its existence from the river.

Traditional fittings and features such as old brass light switches, steamer trunks with vintage labels revealing exciting journeys and sepia-stained photographs enhance the tradition and style of this ‘turn-of-the-century’ luxury safari tent; modern comforts such as electricity, air conditioning and an outdoor shower the only clues that we live in a different time.

The décor is light and neutral; teak furniture and floors, gilded mirrors and crisp white linens deliver a classy luxury tent experience enhanced by the panoramic bush and river views that begin at the edge of the deck.

Dine as you would have in the 1900s. Hamiltons Tented Camp ensures, whatever the occasion, meals are a classy affair. From fine crystal wine glasses to pewter silver water jugs, revel in the dining traditions of old in spectacular bushveld surroundings.

Butlers dressed in traditional colonial uniforms anticipate your every need. Dine on deck in relaxed surroundings or enjoy a bush picnic. The choice is yours!

Homemade baked goods and local specialties are served in beautiful surroundings; the sounds of the bush providing the accompaniment you need for a memorable dining experience.

From champagne breakfasts to High Tea with a delicious selection of cakes and pastries baked freshly at the lodge, even the most discerning foodie will adore Hamiltons international and African flavours.

Enjoy a traditional breakfast in Hamiltons’ comfortable dining room; a stylish affair complete with crystal water glasses and pewter teapots. Then retire to your luxury tent and relax, enjoy a Swedish massage or request a bush walk for an up-close encounter with the Kruger.

Lunch is served on the deck with beautiful views of the surrounding bushveld and the Nwaswitsontso River; the resident hippo making an occasional appearance to much applause. Guests are treated to light salads and tasty desserts before retiring to their rooms for an afternoon siesta.

Sip a sundowner G&T as you watch the sky turn from the brilliance of an African sunset to a bright band of stars; the persistent call of frogs, owls and nightjars accompanying you back to Hamiltons Tented Camp for a romantic dinner on the deck, a canopy of stars watching over you.

Bursting with the day’s extraordinary bush experiences, all that’s left is to retire to the comfort of your comfortable room with nothing but the reassuring sound of the crickets and frogs lulling you to sleep.

A private concession within the Kruger National Park comprising three lodges – Imbali Safari Lodge, Hoyo Hoyo Safari Lodge and Hamilton’s Tented Camp, Mluwati Concession was born out of a spirit of ensuring the future sustainability of the national park.

As one of the first private concessions in the Kruger National Park, Mluwati has worked tirelessly to ensure the sustainability of this pristine wilderness that for over 100 years has been a sanctuary for over 114 reptiles, 34 amphibians and 147 mammal species, including Africa’s Big Five.

Experience a morning and evening game drive during your stay at Hamiltons Tented Camp. Witness the excitement of the first rains; the terrapins playing in river pools, the call of the Pied Kingfisher and steady chirping of sociable tree frogs.

Savour the rich smells of the bush, hear the shrill calls of the Magpie Shrike and see the wind blowing through the feather grass dotting the savannah plains.

A game drive at Hamiltons will reveal new scents, curious sounds and the beauty of an extraordinary African landscape to delight your senses.